Today I am delighted to be taking part in the blog tour for The Bitches of Suburbia by Jane Owen!

Nothing much ever happened on Horseshoe Lane – why should it? It was, after all, just a normal suburban backwater with the usual cross section of growing families, ageing pensioners, the occasional singleton and a brace of curtain twitchers. The arrival of celebrity couple, Heavenly and Travis, however, changes all that. This glamourous pair unwittingly bring about a summer of competitive party throwing and over ambitious home improvement projects that will have disastrous and completely unforeseen consequences.

Neighbours who’ve got by for years with just the occasional chat over the garden fence about the unseasonable amount of rain are slowly nited by suspicion as a husband goes missing, a much loved cat turns up dead on a doorstep and Enid from No 7 is found badly injured at the foot of the cliff.

Could one person be responsible for all of this? Could that person be the strange and unlikeable Hilary Jones from No 9? There was only going to one way to find out and it’s going to involve a lot of whisky…

In this her third novel, Owen’s riveting new story finds a murky side to the suburbs, a side where petty jealousies and neighbourly rivalries escalate out of all control with calamitous results, all intricately observed with her usual dark sense of humour firmly to fore.

I really enjoyed this book and thought that it had some fantastic characters!   The story was great, so easy to follow and very enjoyable!  The plot was really well thought through and I loved how the dynamic changed after the arrival of Heavenly and Travis. The layout was perfect for the book as each chapter is about a person or family that lives on Horseshoe Lane and it makes you feel as though you are living with the characters and getting a sneaky peak in to their lives – it really does make you wonder what goes on behind the curtains of your neighbours!  I have given the book a solid four stars and I really recommend this book, really enjoyed the writing style and Jane is definitely an author that I will look out for in the future!

Jane’s first novel, Camden Girls, was published by Penguin twenty years ago and quickly became an international cult bestseller published in many languages including Japanese, Spanish,German, Hebrew, Italian and Dutch.  She’d already spent many years working in the film business working alongside stars such as Christophe Lambert, Andi McDowell, Daryl Hannah and James Remar before switching to the music business and working for bands such as The Who, Robert Plant, ZZTop and many more.  Eventually, even that got boring and that’s when she wrote Camden Girls. 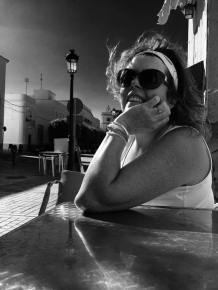 After publication, life became interrupted by an unfortunate traffic accident and Jane moved out of London to Sussex and slowly returned to writing.  Her novels don’t fit into any specific category and, frustrated by endless rejections along the lines of ‘You write beautifully but we don’t know how to sell this book’ she started self publishing.  Rave reviews gave her the confidence to keep going and believe in what she was writing.

She’s still in Sussex, sharing her life with her musician partner, three horses and a dog and divides her day between writing and riding.