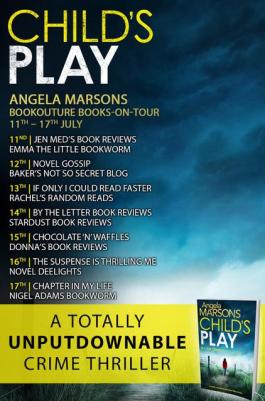 Finally we’re playing a game. A game that I have chosen. I give one last push of the roundabout and stand back. ‘You really should have played with me,’ I tell her again although I know she can no longer hear.

Late one summer evening, Detective Kim Stone arrives at Haden Hill Park to the scene of a horrific crime: a woman in her sixties tied to a swing with barbed wire and an X carved into the back of her neck.

The victim, Belinda Evans, was a retired college Professor of Child Psychology. As Kim and her team search her home, they find an overnight bag packed and begin to unravel a complex relationship between Belinda and her sister Veronica.

Then two more bodies are found bearing the same distinctive markings, and Kim knows she is on the hunt for a ritualistic serial killer. Linking the victims, Kim discovers they were involved in annual tournaments for gifted children and were on their way to the next event.

With DS Penn immersed in the murder case of a young man, Kim and her team are already stretched and up against one of the most ruthless killer’s they’ve ever encountered. The clues lie in investigating every child who attended the tournaments, dating back decades.

Faced with hundreds of potential leads and a bereaved sister who is refusing to talk, can Kim get inside the mind of a killer and stop another murder before it’s too late?

The addictive new crime thriller from multi-million copy, number one bestseller Angela Marsons explores the dark side of child prodigies and will have you absolutely hooked.

I thought that this story was superb!!

I thought that this storyline was excellent, I loved the opening scenes and even though it was gruesome I have to say it is one of the best openings to a book I have read for quite a while, after I had started the book and read that, there was no way that I was putting this book down for a good while!!

DI Kim Stone is one of my favourite all time characters in this genre, she is sassy, has a wicked personality and excellent wit, and also her vulnerability that she keeps hidden where possible makes her a well grounded and believable character. She is a brilliantly developed character and I loved her interaction with Bryant and Keats. She shines so well in this book, it was a pleasure to read each and every page.

I loved that Penn also got to feature in his own storyline too, after we found out more about his personal circumstances in a previous book, I have been rooting for him to fit in and become part of the team and I think his temporary move in this book shows just how well matched he is with Stone and his colleagues in the West Midlands force. I loved the temporary addition of Tiffany (or Tink) to the team too and her conversations with Stone, Bryant and Stacey did have me giggling in places too.

No hesitation in giving this story five stars, I loved it, I was gripped from the first few chapters and hooked right to the fantastic ending.

This is one of the best books in the series and as this is already book 11 in the series that says a lot as not a lot of author’s can keep producing books this strong and so well written – very, very highly recommended!!

Angela Marsons is the Wall Street Journal and USA Today bestselling author of the DI Kim Stone series and her books have sold more than 3 million in 3 years.She lives in the Black Country with her partner, their cheeky Golden Retrievers and a swearing parrot.She first discovered her love of writing at Junior School when actual lessons came second to watching other people and quietly making up her own stories about them. Her report card invariably read “Angela would do well if she minded her own business as well as she minds other people’s”.After years of writing relationship based stories (The Forgotten Woman and Dear Mother) Angela turned to Crime, fictionally speaking of course, and developed a character that refused to go away.She is signed to Bookouture.com for a total of 16 books in the Kim Stone series and her books have been translated into more than 27 languages.Many of her books, including Blood Lines, Dead Souls, Broken Bones, Fatal Promise and Dead Memories reached the #1 spot on Amazon on pre-orders alone.