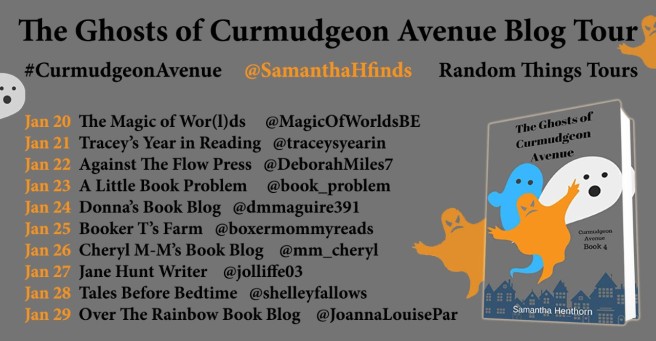 The house on Curmudgeon Avenue should be happy now, the nincompoop residents have all met their sorry ends.

But they haven’t quite left… now that a new family move in can the house find peace?

Or are the ghosts of Curmudgeon Avenue going to interfere with the goings-on, romance and dramas that new residents bring?

Although I see myself as a literary rule breaker, here, I was obeying the conventions of comedy-drama; where there is laughter, there must also be a tragedy. Curmudgeon Avenue all started with a short story I wrote during my time at a writing course in my local library, where I introduced and then killed off three innocent characters within 1000 words. Four years later, and having taken my interest in writing to an academic level, I killed off Harold, Edith and Edna once again. Here is a snippet of their triple fatal household accident:

On this particular day in Whitefield, the sky was filled with grey clouds that looked like porridge. Those climbing creepers Edith had planted years ago wound around the garden fence, up the path, round the door handle and doorway. Despite watching several episodes of Gardeners’ World, Harold had neglected to honour his duties and leaves collected dangerously in massive wet piles on the front path.

Despite the length of time that Curmudgeon Avenue has had to endure their sorry set up, the postman and the window cleaner still regularly got Edna and Edith mixed up.

‘Saw your wife the other day, Harold. How is she?’ Of course, they meant Edna, not Edith. Harold loved pretending he had two women on the go; he had to have some pleasures after all. Their accumulative age was increasing by the day, as you know, time at Curmudgeon Avenue moved rather swiftly.

Routine had become important for the three. Every day they read the ‘Daily Judgement’ newspaper. How many people were on benefits? Who is stealing our jobs? When is Brexit going to end?. There was even an article about how avocados are the most popular cause of domestic accidents in the UK every year. But the story the three enjoyed most of all was, whose taxes are paying for it?

Harold’s goggle eyes darted about under his glasses. He smacked his lips together, and his neck wobbled like a turkey.

‘Halloween and bonfire night means winter is here. I am NOT answering the door’ Edith’s fingers clenched around the neckline of her nightdress.

‘And I am NOT getting deafened this year by whizz-bangers’ Edna asserted. As if she could do anything to stop the population of North Manchester from setting off fireworks! Harold was already plotting an idea of how to protect his wife and sister-in-law from the perils of Winter.

‘Don’t worry, I am in charge of all things firework and Halloween-y. You leave it to Harold’ He then launched into a story about why Catherine wheels are called Catherine wheels, getting it very wrong. Proof, by repeated assertion.

Anyway, Harold and Edith went shopping. Edna stayed at home, continuing to read that article in the paper.

‘They should do something about that’ Edna said, to no one in particular.

At the supermarket, Harold found what he was looking for in the ‘specialbuys’. Noise-cancelling headphones and a trick doorbell. Preparation for noisy fireworks. He popped them into his rucksack. Harold had never been caught shoplifting.  People were usually too busy looking at Edith wearing a nightdress under her coat. When they got home, Edith opened the garage door. As you know, this meant she had to lock it from outside, walk down the entry, down the side street, up Curmudgeon Avenue and up the path. In the rain.

Harold and Edna took it in turns (Harold first) to try on the noise cancelling headphones ready for bonfire night.  Because they were wearing the headphones, they did not hear Edith’s scream as she slipped and skidded on the slippery leaves on the front path, crashing her skull into the front door with her nightdress over her head. There she lay, concussed and freezing to death under a massive pile of wet leaves.

Inside, Edna had wondered what was in Harold’s rucksack for about thirty years. He always had it with him, often forgetting how much space it took up. She followed him into their dingy hallway. Harold set about fitting the doorbell. He reached in for the multipurpose screwdriver and smiled to himself when he felt the contents of his rucksack. Spare socks, Breath freshener, and a tin of peaches he was saving for later. The trick doorbell was designed to send a mild shock to whoever buzzed it. ‘As seen on celebrity reality TV’ was emblazoned in big letters at the top of the cardboard packaging.

Harold lifted his rucksack, swung it around his back and hit Edna clean in the face.  The weight of it knocked her to the floor. Harold was still wearing the headphones, so he did not hear the thump. He fitted the doorbell, but the combination of multipurpose screwdrivers, and steamed up spectacles made for a poor job. The electric shock knocked him flying backwards on top of his rucksack, and on top of Edna, the fancy rucksack straps garrotting him as he fell, and smothering any remaining breath from his sister-in-law.

Edna was right, people do die in threes… or was it Edith who said that?

So you see, I could not possibly leave it there, it would not be fair on the supporting characters. As The Curmudgeon Avenue is narrated by the unseen character of the house, I had to find out what would happen when new residents move in…

The house on Curmudgeon Avenue should be happy now, the nincompoop residents have all met their sorry ends. But they haven’t quite left… now that a new family move in can the house find peace? Or are the ghosts of Curmudgeon Avenue going to interfere with the goings-on, romance and dramas that new residents bring?

I really enjoyed introducing a ghostly angle to the series, it opened up several new storyline threads and is not (intended to be) spooky at all! 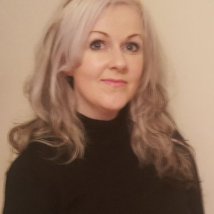 Samantha Henthorn was born in 1970 something in Bury, England. She has had short stories and poetry published in magazines. Her books include the Curmudgeon Avenue series (The Terraced House Diaries and The Harold and Edith adventures). ‘1962’, ‘Quirky Tales to Make Your Day’ and ‘Piccalilly’

She has two cats, one dog, one gorgeous grown up daughter and one husband. When not reading or writing, she is listening to heavy metal and would be thrilled to bits if someone read her books.