The body snatcher who inspired Psycho, the noblewoman known as Countess Dracula, Jack the Ripper, and other killers for whom murder was just the beginning.

From Gilles de Rais’ castle in fifteenth-century France to “the Bloody Benders'” eighteenth-century Kansas farm to Jeffrey Dahmer’s quiet apartment in twentieth-century Milwaukee, history is littered with serial murderers whose first impulse was to take a life. For some, it was never enough. The real thrill came after their victims were dead.

In this shocking anthology, true crime journalist Nigel Blundell brings together more than two dozen chilling profiles of the world’s most unforgettable fiends, including: Ed Gein, the Plainfield necrophile and inspiration for The Silence of the Lambs; Andrei Chikatilo, the “Rostov Ripper”, whose uncontrollable hunger was satiated by more that fifty victims; Dennis Nilsen, whose London house of horrors so overflowed with body parts that they blocked the drains; Germany’s Fritz Haarmann who killed and consumed more than two dozen men, then peddled the left-over meat on the black market; Hungarian countess Elizabeth Bathory whose lust for the blood of virgins–a body count estimated to be in the hundreds–has branded her the most prolific female serial killer in world history; and many more human monsters whose appetites are still the stuff of nightmares.

I am a massive fan of true crime books so I was delighted to be able to pick up a copy of Serial Killers: Butchers & Cannibals, I had read about most of the Serial Killers features in the book but there were a few that were new to me and I loved finding out more about them, it was also a great opportunity to catch up with old “favourites” if that could ever be the right word for a bunch of “monsters”!

I will admit that Serial Killers fascinate me and I love being able to catch a glimpse inside their minds to see what makes them tick, what drove them to commit the crimes they did and whether they were born with it, suffered an early trauma or just turned downright evil.

I loved the layout for this book, the chapter length was great – plenty of detail and just long enough to speak an interest to enable you to read further around some of those mentioned.  I have read other books by this author and he has a great writing style, it is easy to read (even though some of the crimes this lot committed aren’t easy to read about) and it has a great natural flow to it and you can easily dip in and out of the book.

It is 5 stars from me for this one – very highly recommended – I thought that it was a great read!! 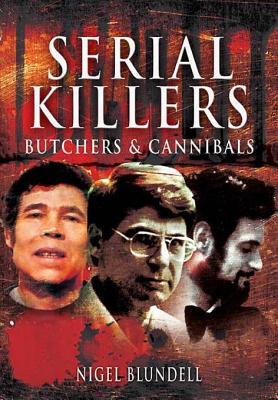