Today I am delighted to invite Zoe Sharp on to the blog to find out more about her new release – Bones in the River which is out now!  Before you read my interview with Zoe, let’s find out a little more about the book…

Driving on a country road late at night, you hit a child.

There are no witnesses.

You have everything to lose.

What do you do?

The traditional Appleby Horse Fair hosts the largest gathering of Gypsies and Travellers in Europe.

The sudden influx of more than 40,000 visitors into the small Lakeland town has always caused its share of problems, with strained relations between off-comers and locals.

But it’s also known as a good time to settle old scores.

This year, the Fair brings with it with the discovery of two bodies near the River Eden—one very recent and another a long time buried.

As CSI Grace McColl and Detective Nick Weston search for answers, old secrets are revealed, old wounds are reopened, and tensions threaten to erupt into violence.

You can grab a sneak peek at the first three chapters, and pre-order here from all the usual retailers. 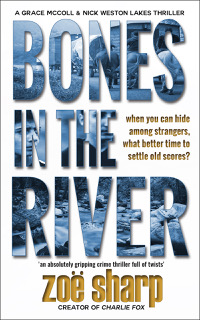 MY INTERVIEW WITH THE AUTHOR!

Q1. When did you know that you wanted to be an author?

A1. I guess I always wanted to be an author, but the first time I realised it might be a realistic possibility was when I was fifteen and I actually finished writing my first novel. Before then, most of my story efforts ran out of steam by the end of the first chapter—sometimes even the end of the first page. I wrote the whole of that first one in longhand, then my father typed it up for me. That first manuscript did the rounds of publishers, where it received what’s known in the trade as ‘rave rejections’. Everybody loved it. Nobody wanted to publish it.

The first pieces of writing I had published were non-fiction. I began working as a freelance journalist, specialising in the motoring industry, back in 1988. After a few years, I taught myself enough photography to sideways into photo-journalism. I’ve been making a living from word and pictures ever since, including—since 2001—numerous works of fiction.

Q2.  What inspired you to write this book?

A2. When I wrote the first Lakes crime thriller, DANCING ON THE GRAVE, I fully intended it to be a standalone novel. I’d tried out the character of CSI Grace McColl in a short story, Tell Me, and liked her enough to take her forward into a longer work. (That short story was also made into a short film.) The first book was my take on the Washington Sniper incident of a few years ago, but set in the English Lake District.

After DANCING came out, the reaction was such that I knew I really needed to revisit Grace and the detective she works with, Nick Weston. Having lived in and around Appleby-in-Westmorland for years, I’d always wanted to set a story during the annual Gypsy Horse Fair. Established in the 1600s, the event has become the largest gathering of Gypsies and Travellers in Europe. It attracts off-comers in huge numbers and causes all kinds of friction. Locally, it’s also known as a very good time to settle scores. Or, as is the case in BONES IN THE RIVER, to try to escape blame.

Q3. If you could see this book in one sentence what would it be?

A3. ‘Driving along a country road at night, you hit a child; there are no witnesses and you have everything to lose, so what do you do?’

A4. I’m just finishing off an eBook of Bonus Features for the revised edition of DANCING ON THE GRAVE—it’s been given an eye-catching new cover to link in with BONES IN THE RIVER, now it’s part of a series. I did an eBook giveaway to my mailing list of Bonus Features & Behind the Scenes articles, features and interviews for the last Charlie Fox book, BAD TURN: #13. I wanted to do the same for DANCING. Afterwards, I have another standalone novel in the works, before I write the next Charlie Fox crime thriller. And then, of course, I’ll start on part three in the Lakes trilogy. Apart from that, and some moderate house renovation in what I laughingly call my spare time, I’m just loafing…

Q5. Who is your biggest inspiration?

I think I have to have to say Lee Child. Not only is he someone I greatly admire as a writer, but he’s also the consummate professional, always approachable, unfailingly entertaining as a panellist or interviewee, generous with his time, and always ready to support other writers. I’m proud to call him a friend.

Zoë Sharp began her crime thriller series featuring former Special Forces trainee turned bodyguard, Charlotte ‘Charlie’ Fox, after receiving death-threats in the course of her work as a photo-journalist. She opted out of mainstream education at the age of twelve and wrote her first novel at fifteen. As well as the Charlie Fox books and the Lakes crime 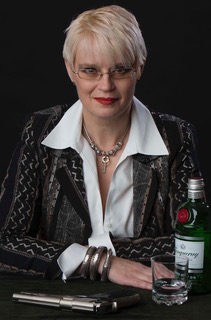 thriller series, featuring CSI Grace McColl and Detective Nick Weston, Zoë writes standalones, short stories, and collaborations with espionage thriller author, John Lawton. Her work has won or been nominated for awards on both sides of the Atlantic, been used in school textbooks, inspired an original song and music video, and been optioned for TV and film. When not in lockdown in the wilds of Derbyshire, she can be found improvising self-defence weapons out of ordinary household objects, international pet-sitting, or crewing yachts in the Mediterranean. (It’s a tough job, but somebody’s got to do it.) Zoë is always happy to hear from readers, reader groups, libraries or bookstores. You can contact her at Zoe@ZoeSharp.com.