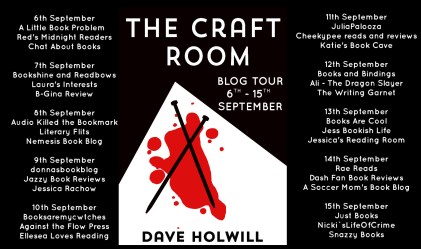 Sylvia Blackwell is tired. Her grandchildren are being kept away from her, and the expected inheritance that might finally get her middle-aged son to move out has failed to materialise – thanks to her mother’s cat. It is becoming increasingly difficult to remain composed.

On a romantic clifftop walk for her 47th Wedding Anniversary, an unexpected opportunity leads to a momentous decision that will irretrievably change the course of her life.

The Craft Room is a darkly comic tale of sex, crepe paper, murder and knitting in a sleepy Devon town, with a ‘truly original’ premise and genuinely jaw-dropping moments.

What would you do if unexpectedly freed from bondage you never knew you were in?

How would your children cope?

How far would you go to protect them from an uncomfortable truth?

You can only push a grandmother so far…

I wasn’t really sure what to expect from this book, but what I found was a well written story that was a lot of fun to read!

I really enjoyed the plot with this one and the characters are great – I think Sylvia is probably a character that quite a few people can understand and sympathise with but maybe not everyone who feels like will react in the same way!!

This is a story that is dark, funny and completely unexpected – four stars from me – a very enjoyable story – highly recommended! 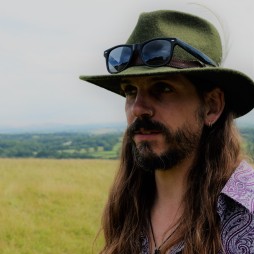 Dave Holwill was born in Guildford in 1977 and quickly decided that he preferred the Westcountry – moving to Devon in 1983 (with some input from his parents).

After an expensive (and possibly wasted) education there, he has worked variously as a postman, a framer, and a print department manager (though if you are the only person in the department then can you really be called a manager?) all whilst continuing to play in every kind of band imaginable on most instruments you can think of.

His debut novel, Weekend Rockstars, was published in August 2016 to favourable reviews and his second The Craft Room (a very dark comedy concerning death through misadventure) came out in August 2017. He is currently in editing hell with the third.