In this chilling history of the bodysnatching trade, the stories of Britain’s lesser known Resurrection Men are told. Here are the stories of the men who robbed graves during the winter months of 1742 – 1832, selling fresh cadavers to anatomists up and down the country all in aid of medical advancement. The murders of Burke and Hare often dominate the macabre tales of bodysnatching, but the stories of Henry Gillies, William Patrick and Joseph Grainger are all just as gruesome. Stories involving medical students and anatomists are retold as we discover the cases that have become hidden in history.

Anatomy schools, short of fresh cadavers for dissection would pay high prices for corpses, asking no questions about their origins. This resulted in the criminal underworld of the Sack em up Men or bodysnatchers, which spread fear and horror throughout the United Kingdom. It’s time to discover these lesser known stories about Britain’s often forgotten history.

I really enjoyed this book and I thought it was really interesting, I knew that it was quite common in the North and Scotland due to the infamy caused by Burke and Hare but I wasn’t aware until I read the book that it actually happened in many locations throughout Britain.

I was reading it I was away for a weekend in Great Yarmouth and we parked next to a road called Body Snatchers Row – that was an unexpected surprise!

These shadowy characters were actually vital to the development of science and the training of medical student.  They kept the medical students and medical schools in supply where they could of cadavers to dissect and they were paid handsomely for the wares that they provided.

The book does a great job of detailing more about them and what they did and gives examples with some of those caught and prosecuted for their crimes. There were some colourful characters in action at that time for sure!

I thought that the book was well written and it was very well researched, the author clearly knows her topic very well and it came across when I was reading.

It is 4 stars from me for this one, I really enjoyed it and it definitely caught my interest – highly recommended! 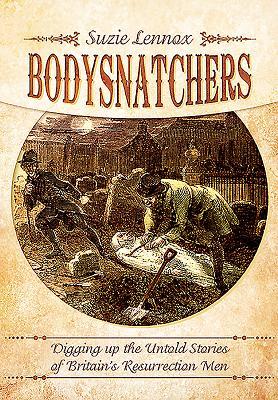